The journey to Lexington Green all started in November of 2015. Long time ACI Distributor, John Hadlock of Diamond Pond/Kentucky Garden & Fountain contacted our National Sales Manager, Mary Jo Credi to discuss the possibility of ACI creating a multiple nozzle fountain display. John had a landscaping contract for a mall in Lexington, Kentucky, ‘Lexington Green’, that had a pond on site. Lexington Green wanted to give their outdoor areas a major face-lift and it seemed common sense to use the pond and a water feature as ‘wow factor’. The initial design discussed by ACI was a single pump floating system operating four geyser style nozzles around a center nozzle, all with lights. The original idea of John Hadlock was a 50′ arced row of 20 nozzles. As discussions between ACI and Diamond Pond progressed the magnitude and complexity of the job evolved. Lexington Green expressed their desire for an oval (or ‘ring’) of nozzles.

Narrowing Down the Field: 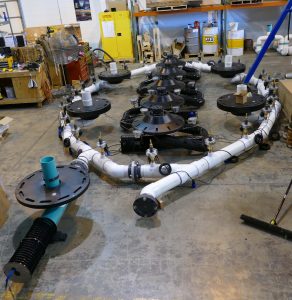 By December 2015 the original simplistic (in hindsight) designs proposed by ACI and John Hadlock were merely a memory. The project was at a point where the desire for a mini-Bellagio style unit was set in the end-user’s mind. A unit with 29 nozzles total between two rings and a center point nozzle reaching 15′ in the air was envisioned to incorporate dancing lights and water. After much discussion, engineering and design work, the final design was settled on in mid-February 2016. ACI would be building a unit with a 24 nozzle outer ring powered by (2) 5HP Angel Waterfall Pumps. The outer ring would measure 20′ by 15′ across and the spray height of each nozzle would be a maximum of  25′. Each nozzle in the outer ring would also include an advanced RGB LED ring light. Within the outer ring would be a row of (5) 2HP SS2 pumps with a 15′ spray height maximum, each equipped with a 3 light set of advanced RGB LEDs. A total of (7) VFDs would be used to control pumps.

With the decision on unit design set, it was time to start brainstorming the control options that would be necessary. ACI reached out to a System Engineer for control panel design assistance. He (the System Engineer) is an expert in working with interface electronics which would be needed to coordinate the valve channels, lighting and music. He used his own software to program the unit and he set up a three panel system to operate the unit;
The Fuel: The Power Panel simply houses the basic pump controls that supply power to the VFDs.
The Brain: The PC Panel contains a laptop that runs the programming and outputs DMX controls to the VFDs, lights, and valves. It also controls the dual stereo amplifiers and (4) outdoor speakers.
The Muscle: The Control Panel holds the components that are receiving the DMX signals from the PC Panel for operation. 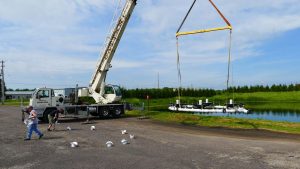 Months passed with Aqua Control working closely with John and the end user to make sure the unit was built to their specifications and that the site would be properly prepared for install. In May ACI was at a point in which we were ready to get the unit in the water for factory testing. We flew in the System Engineer to ACI to hook up and test the panels. ACI personnel launched the (5) center units into the pond and constructed the outer ring on the blacktop at the test ponds edge. With everything set, we brought a Terex T340 crane in from a local company Cattani & Son, a division of Barnhart Crane & Rigging. We utilized the crane to lift the outer ring, swing it out and lower it over the 5 center units into our test pond. Once the outer ring was in place, ACI staff  attached the (2) 5HP Angel waterfall pumps to the outer ring and hooked up power cables. A total of 22 cables power the lights, pumps and valves on this unit. As each cable was rolled and hooked to the unit, the System Engineer and Adam Pacholski (our General Manager & Electrical Engineer) were working diligently to wire the panels. 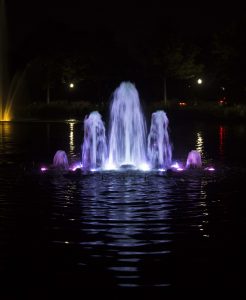 After a long day of hot and exhausting labor we were finally ready to power on the units and see the finished result. That evening, as dusk settled, ACI employees and their families gathered at the test pond to see the months of planning, design and building take life. While the display was quite impressive the need for a few slight adjustments was identified. The outer ring performed wonderfully while the inner row required added stability. A few bracketing changes among the 5 inner units solved the problem quickly.
The now fully tested unit was ready to be broken down for shipping. The complete fountain was easily disassembled and packaged for shipping. Next, it was time to arrange installation in Kentucky. 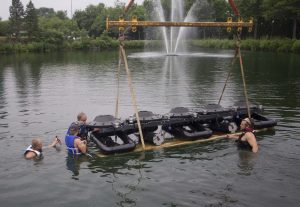 The unit was set to ship out to Lexington Green on a Monday. As the truck was backing into the dock to load the unit and head to Lexington, Adam and Willis Dane (ACI President & Owner) were jumping in the car to drive to Lexington to be on site for install. The System Engineer was also headed to Lexington to assist with panel set up and install. It was a long week in Lexington but thanks to John Hadlock and his team from Diamond Pond/Kentucky Garden & Fountain, Walker Electric (site electrician) and Rankin Peel (Site Maintenance Engineer) the install was achieved. A few bumps were encountered along the way but through communication and teamwork all were successfully handled. Saturday night the unit was up and running to wow the patrons of Lakeside at Lexington Green!

Aqua Control, Inc. would like to thank John & Kathy Hadlock and their team at Diamond Pond/Kentucky Garden & Fountain for the opportunity to build this water feature and the hardwork and organization they put into the installation. Thanks to Robert Langley (Owner/CEO), Scott Davidson (President) & Jennifer James (Property Manager) at Langley Properties Company and The Mall at Lexington Green for the vision. Thanks to Walker Electric for the site preparation, and Rankin (Maintenance Engineer at The Mall at Lexington Green) for bringing this project to life. Cheers to all!

"We just installed our new fountain and the water in our pond began clearing almost immediately."